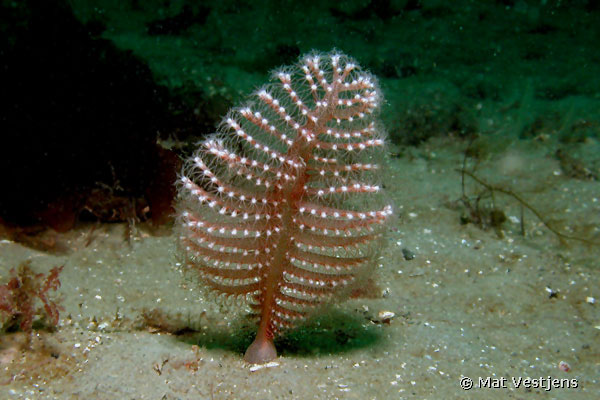 Pennatula phosphorea is a sea pen forming erect colonies of up to 40 cm tall. Swollen with water, they are fleshy and slightly bent over the surface. The bulbous stalk embedded in sediments is only visible in its upper part. Above the surface, a 25 cm tall rachis have numerous alternate opposite branches on each side of the central axis. They are triangular in cross-section in a leaf-like shape. Each branch has about fifteen autozooids regularly spaced, opening on the ventral side of the colony. Tiny siphonozooids are laid on each side of the central axis, in broad rows on the dorsal side, in narrower lines and extending a little between the branches on the ventral side. Colonies are retractile and may withdraw within the sediment or be more or less swollen above the surface. They are yellowish to pale pink with reddish shades due to deep blood-red sclerites concentration. When stimulated, the colony has a blue-green luminescence..

Pennatula phosphorea is found in muddy and sandy bottoms from 10 to at least 100 meters deep, in the North-East Atlantic, the North Sea and probably the English Channel and in the Mediterranean Sea.

Polyps : within these colonial animals, the polyp is the individual.

Siphonozooids : specialized polyps without tentacles in charge of driving water into the colony.

Polyps : within these colonial animals, the polyp is the individual.

Siphonozooids : specialized polyps without tentacles in charge of driving water into the colony.

How to cite this page

The texts and images on this website are not free of rights and cannot be copied and/or used without the agreement of their respective authors.